The following article provides information and thoughts about the upcoming events in the near future. We are excited to attend to all of these events and we want to say a BIG THANK YOU to everyone who supports us. Thrilling weeks ahead!

The Minor takes place in Bucharest, Romania from the 15th to the 18th of June this year, including eight different teams and a prize pool of 50.000$.

We are happy to be one of the contenders for one of the three spots at the Major Qualifier.

“If we keep playing as we did until now, we have a decent chance to place top three; I´m sure about that.
We continue to improve, on good days we can beat any team. Of course, some teams fit us more than others and the form on that day plays into it as a big factor as well. We are motivated, we really want to represent Germany on a Major. It would be sad if no German team would manage to do just that.

Our Gaming House provides us significant opportunities regarding possibilities to practice. At the start of the week, “kakafu” and “gob b” create a training plan which we take very seriously. Before and after Scrims our strats, grenades and mistakes are getting discussed and additionally recorded. We practise this way since March and achieve positive improvement.”

To be able to participate at this event we had to go through the Closed Qualifier where we met teams as PENTA, North Academy, igame.com and even fnatic Academy. Gladly we managed to pull through and win against each opponent except PENTA.

The next season of the ESL PRO LEAGUE is going to be a spectacular new chapter for the team. The prize pool for the entire league will consist of a total amount of 1.000.000 USD. The level of competition is exceptionally high just as our motivation. Obviously, we will prepare well and try our best to reach the top. We are thrilled to play our first matches in the PRO LEAGUE and are thankful for your fantastic support! The following fourteen teams are competing in Season 6 of ESL PRO LEAGUE. 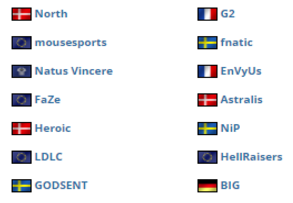 “Every team in the ESL PROLEAGUE counts to the best in the world. Each team can surprise, you can not afford any mistakes if you want to reach the playoffs. However, some teams who fit us and some do not at all. It is always hard to play against Astralis because, in my opinion, they play the best counterstrike in the world. We do not want to be just participants; our goal is to reach the Play-Offs. Last year, tabseN, gob b and myself managed to qualify for the finals in Sao Paulo.

Off course it is going to be harder in Europe to accomplish that, the competition is much bigger.
However, we are going to prepare ourselves well and I hope that we can perform as good as we prepared. The practice results are very promising, but they should not be counted that high. In comparison, an official game is always different to a training match.
The system of the EPL suits us very well which lets me looking forward to a good season.”

From the 5th of June to the 2nd of August we have to defend our title in a league format against 9 of the best German teams. Every League-Match is going to be played on a Monday, which means there is only one game-day per week. Also, the finals take place on the 26th of August at the well-visited Gamescom in Germany this year.

It’s our primary goal to defend the German Championship in Cologne and carry the second trophy back home to Berlin.

“The ESL Meisterschaft is very important for us. We want to prove that we are still the best team in Germany and defend the German Championship.”

We had a great time at the last ESL Meisterschaft in Duisburg, gained experience and went home as German Champions. It’s our dream to repeat this experience in Cologne, see you there!