Fans of Unikrn and BIG alike will remember when the two combined forces with their aim at the big dogs of CS:GO. It’s time to check in with BIG and give fans an inside look to how the organization is supporting its players, starting with this interview with Unikrn CEO Rahul Sood. 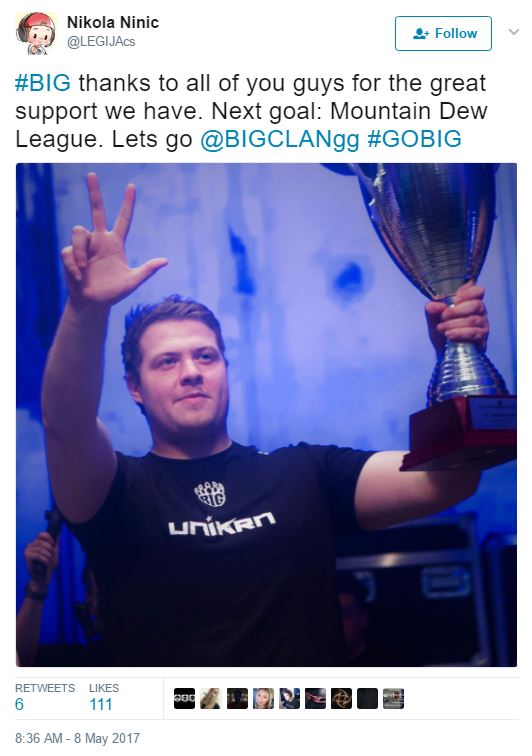 How has BIG been progressing?

“We could not be happier about our decision to invest into the team; they are progressing phenomenally! Every time they play, all three of our offices watch from around the world (Australia, Germany, United States). It brings Unikrn even closer together: even though we’re from three continents, we have a common home team! They are all amazing players and the last weeks have really shown they can trade blows with the best teams out there.

We are also big fans of their documentary series which really brings fans like us closer to their experience and personalities.

Qualifying for the ESL Pro League and the qualification for the PGL EU Minor — we could not be more proud and we have very high hopes for even better news as BIG continues to capture their own potential.”

Could you describe Unikrn’s relationship with BIG?

“We are very hands-off when it comes to interacting with the players; we want them to have the room they need to reach their peak performance. We are here to help provide resources to make that happen. They have an amazing coach and a great team manager who take care of them.

Although we don’t work with the players, we do speak with Daniel Finkler (CEO of BIG) on a daily basis to make sure they have all the support they need. We gave their management a room in our Berlin office which makes communicating with them a lot easier.

As previously stated, we’re not only supporting them through financial backing, but we also advise them on business development, sponsorship acquisition and general marketing. We love to work with their management and social media staff. If you take a look at their twitter it’s apparent how much they pour into the community, which aligns with our view of what esports should be.”

Unikrn has sponsored mousesports before, if BIG qualifies for the PGL Major Qualification they might play each other. Could this become the German “El Classico”?.

“When we were supporting Mousesports, we were very happy to support and sponsor the best German team at the time. Mousesports took a different route with their roster and, after the sponsorship negotiations fell through, we had to look at other opportunities. BIG fronts an all German lineup and has their gaming house in Berlin. The top management moved to Berlin as well which really shows the commitment. It is a Berlin organization, unlike Mouz (who have their HQ in Cologne which they share with SK-Gaming). So maybe we can’t put Mouz in a German El Classico. Perhaps Alternate Attax, who also field very talented players, would be a better national rival.

I guess if you were to assemble a fantasy dream team of the best CS:GO players in the world, who happen to also be German, then BIG checks all the boxes.”

Do you have any closing thoughts on CS:GO in general?

“Not as a sponsor.

As a fan, I would love to see commentators shine the limelight a bit more on the work from support players. Don’t get me wrong: We all love to see TabseN and Nex going crazy, but what the viewers don’t see and hear is that almost every time they peek around the corner, they get a well-timed flash from Legija or Gob.

Once commentators manage to catch those plays more often and explain it I think the community will have a whole different level of appreciation for players who enter a server to make their hard-hitters shine bright.”

“The letters “BIG” have multiple meanings. In addition to the official name (Berlin International Gaming), the acronym reflects our corporate vision: as in, be bigger and be better. We want to build a leading, world-class esports organization. We want to provoke emotions, inspire a new generation and give endlessly to our community of fans.

Not as an acronym, but as an organization, BIG stands for loyalty, honesty and team spirit above all else. We feel like a big family that goes through ups and downs and meets challenges together. These values are deeply rooted in our culture.

For me, it is important that our partners and the people behind the companies we work with share these values and fit our corporate culture. Unikrn fits in like a natural extension of our own family. Tom Lemke, Philip Bianchi, Rahul Sood and all the people in the background share our values, support us in many ways and cheer passionately every day for our team. Since the beginning of our partnership with Unikrn in January, we have been working together closely on projects and plans for the future of BIG. Unikrn is an essential part of our BIG family and we — everybody at BIG and everybody at Unikrn — are overwhelmed with excitement about the future of our clan.”

THE STORY OF BIG SO FAR:

May 18, 2017: BIG beats Virtus.pro and Penta to qualify for the ESL Pro League Season 6

May 19, 2017: BIG qualifies for the PGL Europe Minor Championship