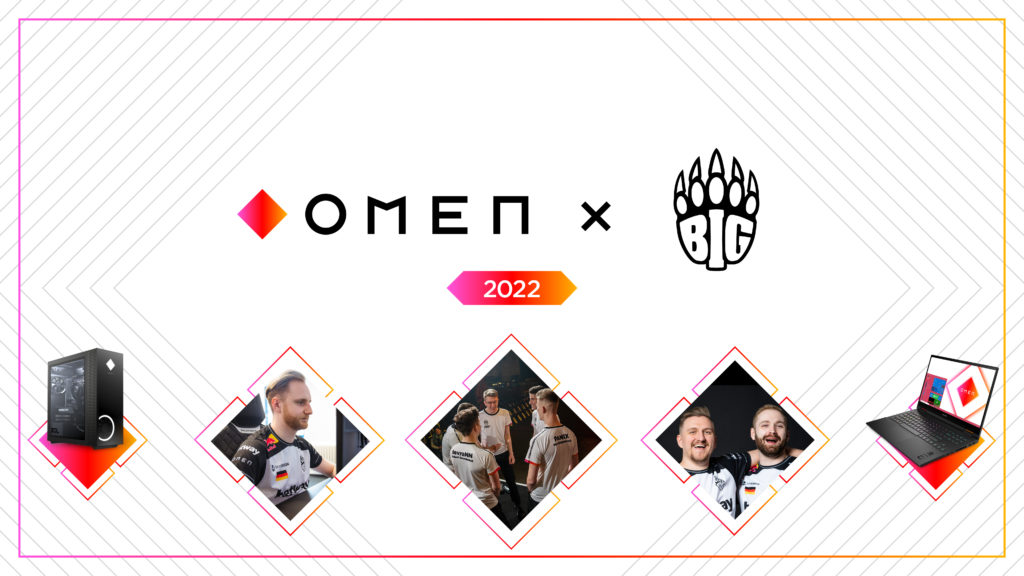 Berlin, August 2nd 2021 – Berlin International Gaming (BIG) and OMEN, HP’s gaming brand, are extending their long-standing collaboration. After joint successes such as reaching the finals of ESL One Cologne 2018, and securing multiple trophies and the top position in the World CS:GO Rankings, BIG and OMEN are also focusing on the promotion of young esports talent as a key element of the cooperation.

“Since the unforgettable moments at ESL One Cologne 2018, we count OMEN among our loyal collaborators, and it has been an important pillar of our organisation ever since,” says Daniel Finkler, CEO of Berlin International Gaming (BIG). “At the heart of the tie-up is our talent development programme. Building on the success of the BIG. OMEN Academy team, which is a key part of our talent programme, we are launching an international Academy League. Together with OMEN, our Academy team will be competing across Europe, and by doing so, we’ll reach another milestone in our work together.”

OMEN is also now the main supporter of the new BIG Valorant team built around Fatih “gob b” Dayik. Valorant was released in summer 2020 by Riot Games – the developers of League of Legends – and has already taken the esports world by storm. BIG announced its entry into Valorant with a professional team under team captain Fatih “gob b” Dayik in July 2020.

“OMEN has been an outstanding collaborator over the last few years, and their support of the BIG Valorant team is testament to the ongoing relationship and our collective engagement in one of the strongest growing esport titles out there,” says Daniel Finkler, CEO of BIG.

“BIG has proven with the CS:GO team that they understand how to set up successful teams for the long term and establish them at the top. Our support of BIG’s Valorant Team and the renewed collaboration between OMEN and BIG is the next logical step towards the future. With gob b, we have an absolute esports veteran on board who has already been able to celebrate great successes in CS:GO and we are pleased to continue working with one of Germany’s most successful FPS players,” says Jochen Ziegler, Director Personal Systems Marketing DACH, HP Inc. “We’re excited to see how the ongoing tie-up between OMEN and BIG will develop as we continue to support esports and the amazing talent in this industry.”

In addition to continuing the BIG. OMEN Academy, the founding members of the WePlay Academy League are expanding the academy team scene and driving the professionalisation of esports even further. The League enables players to take part in an international competition with a prize money of over USD 100,000, which is intended to give rising talents the opportunity to work towards a professional career.

BIG and OMEN are also continuing their joint commitment in the amateur sector. This year, for example, the “BIG Academy Hunt” tournament was held for the first time. The tournament is intended to encourage amateurs to test themselves against semi-professional teams such as the BIG. OMEN Academy Team and compete under professional conditions.

With OMEN Squad, OMEN has launched a streaming format this year in which personalities such as Headshinsky, aSmoogl, Maty and Sissor face new gaming challenges twice a month. This project has now been extended for another year.

“OMEN Squad allows us to be close to the gaming community and interact directly with them. The partnership with BIG also plays a big role here. For example, in April we were able to hold a League of Legends showdown against the BIG League of Legends team successfully. We hope to leverage even more synergies between OMEN Squad and BIG in this area in the future,” said HP’s Jochen Ziegler.

About the BIG. OMEN Academy Team

Since the joint entry into the promotion of young talents with OMEN by HP, the official BIG. OMEN Academy team was presented to the public after an intensive five-week application and casting phase in October 2018.

During the evaluation of hundreds of applications, replays, and letters of motivation and the screening of selected talents, the expert team from BIG and OMEN by HP had to consider a variety of skills.

In addition to the gaming potential, communicative skills, the general ability to work in a team and tactical decision-making behaviour were decisive. In the end, the expert team agreed on a highly talented junior team that not only convinced on a mechanical, communicative and tactical level but also combined the necessary development opportunities with an average age of just over 18 years.

In the past year, the team improved at an exponential rate, not only bringing back great results from domestic leagues, but finding their footing in smaller international cups as well. The highlight of the last few months was winning Season 15 of 99Liga Division 1, and qualifying for the 99Liga Finals, where they tried their strength against some of the best German teams on LAN.

With our new line-up, we continue our mission to develop talent in the German scene. In the international $100,000 WePlay Academy League we compete with the best Academy teams in the world. As before, one of our goals is to reach the top in the 99Damage League and the ESL Championship and to do well in the ESEA Main.

Berlin International Gaming, worldwide known as BIG, is one of the most successful European esport organizations. Currently, the German organization employs professional teams and players in nine different titles, including League of Legends, Counter-Strike: Global Offensive, Quake Champions, Trackmania, Valorant, StarCraft 2, Clash Royale and Brawl Stars, each of which are among the best in Germany and Europe. The organization’s flagship is the glorious Counter-Strike: Global Offensive team around team captain Johannes “tabseN” Wodarz. With millions of spectators and crowded arenas, Counter-Strike is one of the hottest and most prestigious titles in sport. Since 2017, the German team has established itself among the world’s top teams and celebrates numerous respectable successes.

In addition to winning the DreamHack Masters Summer 2020 and CS_Summit 6 Europe, numerous fans remember the second place during ESL One Cologne 2018 inside the Lanxess Arena until today.  In addition, the CS:GO team was successfully represented in the ESL Pro League and was able to acquire a member slot within the elite league “BLAST Premier” in January 2021 after a competitive bidding process. In total, BIG’s professional teams have won over USD 1,600,000 million in prize money to date.

HP Inc. creates technology that makes life better for everyone, everywhere. Through our product and service portfolio of personal systems, printers and 3D printing solutions, we engineer experiences that amaze. More information about HP Inc. is available at http://www.hp.com.