After what was a stormy and uncertain period in the history of BIG, we are finally on the uptrend again, bolstered by the acquisition of Owen “smooya” Butterfield from Epsilon as our permanent fifth. Although we haven’t played much with the young English talent yet, we have a lot of great news to share with the fans, so we decided to whip up a blog post listing our CS:GO achievements in the past few weeks!

Earlier in April, we have played in the European qualifiers of ESL One Belo Horizonte, and managed to qualify for the event after beating Quantum Bellator Fire, EnVyUs, Alternate aTTaX, and Gambit! The tournament, which will run between the 13th and 17th of June, will feature a prize pool of $200,000, and will be the first LAN event where we will compete with our new line-up. As one of the eight teams at the event, we will be facing off opponents such as FaZe Clan, SK Gaming, and mousesports.

Perhaps the most incredible piece of news for us in the past weeks was receiving an invite to one of the most significant events in the calendar: ESL One Cologne 2018. For a German organization, this event is by far, next to the Major, the most important tournament and we are very grateful for the opportunity to represent Germany at ESL One Cologne. We are looking forward to competing against some of the best teams in the world on home soil, backed by our amazing fans. We hope to see all of you there starting from the 3rd of July!

However, the good news doesn’t stop there. With the help of Nikola “LEGIJA” Ninic, we had a very successful run in ESEA MDL Season 27, advancing to the finals in Leicester alongside the Bulgarian Windigo Gaming. Defeating them in a BO3 series, we managed to qualify for ESL Pro League Season 8, marking our return to the most prestigious online league in CS:GO. Starting September, we will be locking horns with the best teams in the world online. Our streak of success continued in Leicester, as we set our sights on the ESEA Season 27 Global Challenge, and became the champions after defeating Order, Windigo, and Team Spirit.

During the first seven months in 2017, our former CS:GO roster had a tremendous winning run. The team initially earned a top placement at their first event at DreamHack Leipzig, won the German Championship, earned a spot for ESL Pro League, qualified for the Major and gained the legend status. However, it wasn’t possible to obtain this level during the last part of 2017 and the early days of 2018. After the Major in January, we came to the joint conclusion, that a change is needed. The team did a great job during this transition phase, especially LEGIJA supported the team in many aspects and ultimately played a key role during the qualification phase of ESL Pro League as a top-scoring stand-in. I’m very proud of his development and I’m sure he will do even better as a coach in the upcoming months together with Alexander “kakafu” Szymanczyk. With ESL One Belo Horizonte, ESL One Cologne and the upcoming ESL Pro League Season 8, we have some major challenges ahead. There is no time to rest now, we already started the preparation phase with our new roster right after our 1st place finish at MDL Global Challenge in Leicester last weekend.

Many of these achievements wouldn’t have been possible without the help of LEGIJA, who played as a stand-in for the team in some crucial matches both online and at tournaments. Nikola departs from the roster as a true champion.

The last weeks have been really stressful since I rejoined the roster for MDL playoffs, but I think we had one of our best two months with qualifying for ESL Belo Horizonte, winning MDL and Global Challenge. The return to the Pro League means everything for us. It wasn’t easy to come back into the game from the coach position, but for me it was clear that I have to do it for BIG, our family and our friends. Everyone worked hard to reach our goals, the good team chemistry had massive impact on our results. Now we have to set new goals for ourselves, I’m sure we will have some very decent showings this year! 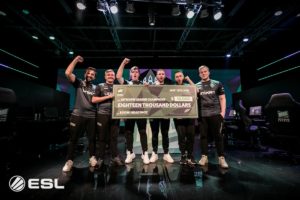