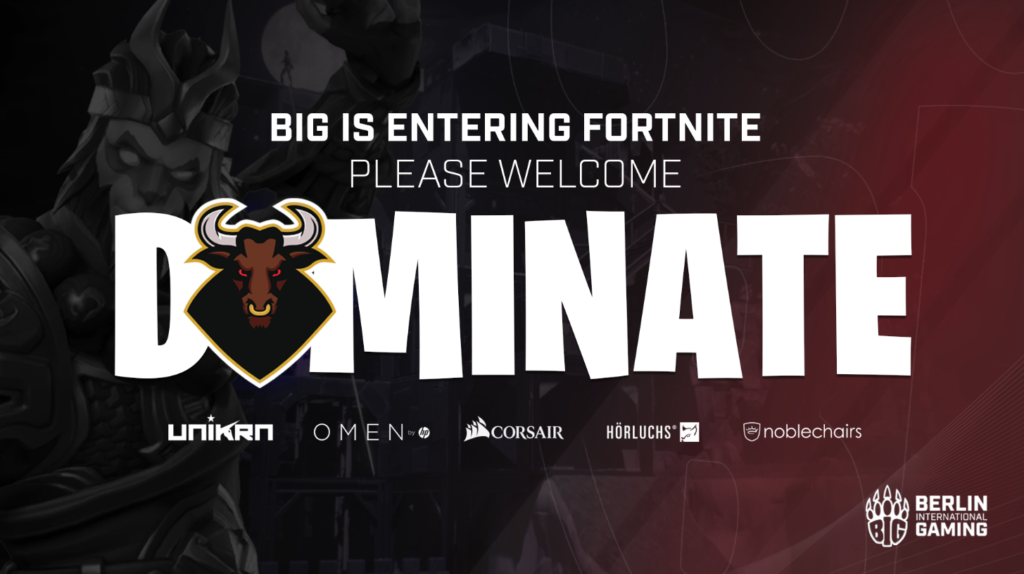 Over the course of the past few months, we have closely followed the impressive growth of Fortnite, looking for the best opportunity to enter the scene. After reviewing all our prospects in the space, the selection ultimately fell on Daniel “DomiNate” Garcia, who will be joining Berlin International Gaming as our Fortnite player and streamer!

If you are a CS:GO fan, you might already be familiar with DomiNate, as he has competed in the Swedish scene for several years under the banners of Publiclir and Exertus. After his departure from Counter-Strike, DomiNate has set his eyes on Fortnite, and has since become one of the most well-known Swedish Fortnite players. DomiNate is a natural talent in Fortnite and we are very excited to resume our journey in the battle royale genre with him!

Gaining over 125 million players in less than a year, Fortnite is one of the fastest growing esports titles in the world. With a professional scene backed by the strong financial support of Epic Games, hundreds of thousands of fans tune in to streams and championships on a daily basis, cheering for their favorite players and teams competing in tournaments with massive prize pools. Starting today, Berlin International Gaming will be one of the organizations the fans will be cheering for on the streams.

I am incredibly happy to start my professional career in Fortnite under the colors of Berlin International Gaming. With the game still in its early stages leaving a lot of room for growth and evolution for the professional scene, and I am excited to see what the future has to bring! I’m really looking forward to putting myself and BIG on the Fortnite map.

With more than 100 million USD in prize money for the upcoming tournament series, & record-breaking numbers of active gamers, Fortnite is more than just another battle-royal game. Tens of millions of players worldwide are passionate about the game and strive to be part of the upcoming million dollar prize pool championships. Today, we are happy to announce our entry into the market with one of the best Fortnite players on this planet, Daniel “DomiNate” Garcia. His dedication and passion fit our ambitions perfectly and we are thrilled to see him play under the BIG tag on the battlefields of Fortnite. Welcome to BIG!

Fans will be able to see DomiNate in action right away, as he will be competing in this week’s Summer Skirmish tournament with $500,000 on the line! You can find more information about the event on our Twitter page.